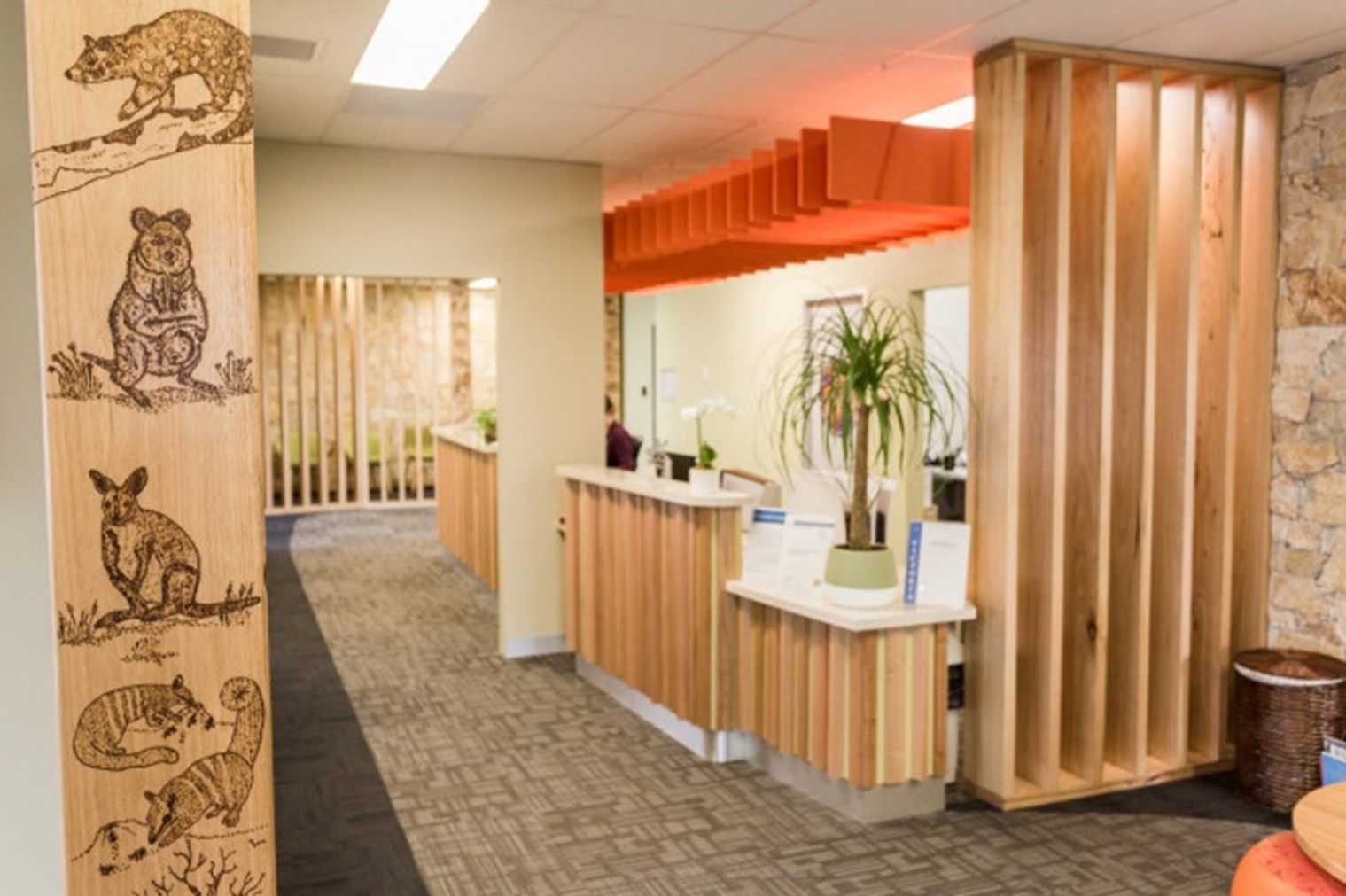 In case you missed it, Victoria Police recently posted on their Facebook page, bringing to light the wonderful work that occurs across the state of Victoria through the Multidisciplinary Centres. We are so proud that our beautiful office space here in Morwell was used to showcase this work.

“Believe it or not, this is a special type of police station.
It is one of eight Multidisciplinary Centres (or MDCs) around Victoria which are designed to provide an integrated and victim-centred way of responding to sexual crime and child physical abuse.

MDCs, like this one in Morwell, house a range of agencies and services under the one roof, including the Victoria Police Sexual Offences and Child Abuse Investigation Team (SOCIT). Our specialist SOCIT teams work alongside empathetic and professional counsellors and advocates, DHHS, child protection staff, community health nurses and forensic medical officers.”

We wanted to take this opportunity to share with you the background of how this building came to be.

Former community development project worker of Gippsland Centre Against Sexual Assault, Mr Donat Santowiak, coordinated and led the Design and Decor (D & D) team that was responsible for the interior furnishing and design layout of the Gippsland MDC.

Here is their story (written by Mr Donat Santowiak 2014):

Foundation for the design theme of the MDC evolved through conversations between GCASA Management and appointed project worker (Mr Donat Santowiak), as well as through interactions with broader GCASA staff team. It was obvious from the beginning that everyone favoured utilising elements of the natural world in the design concept and its details. This ‘vision’ was in alignment with scientific evidence that validated the concept that spaces that brought together elements of the natural world may positively influence clients’ experiences of service provision. It was hoped that this would be so, particularly for new clients who had experienced traumatic events in their lives; the D & D team wanted a positive and uplifting experience on persons entering the building for the first time. Hence, shapes, colours, and textures in the form of wood, stone, water depicting aspects of nature, were to be considered. And, as it occurred in nature, the incorporation of curved lines in the design (as much as practicable) rather than straight lines, also became a fundamental design aspiration.

Coincidentally and usefully, the adoption of nature as a theme had also assisted later in the design process when collective choices and decisions were being made. In other words if “it” existed in the natural world, then it was more likely to be unanimously adopted as a concept or as a specific detail.

It was envisioned that the MDC’s “sense of place” would:

For clients:- Evoke a conscious or subconscious sense of safety, calm and openness to participation. Ultimately, it was hoped that this translated to a reaffirmed determination to seek healing, growth and justice.

For agency staff persons:– Develop an enhanced capacity to focus, reflect and seek innovative outcomes. Ultimately it was hoped that the MDC environment would aid a deeper sense of purpose, fulfillment and self-care.

To achieve these ideals, a decision was made to form a community based Design and Decor Team. (D&D Team)- featuring a community grass roots membership.

Engagement with a group of community members who represented a diversity of social belongings, as well as specific skills and experiences, was intended to be the corner stone of the D&D project. From the project perspective of logistical management and group dynamics’ considerations, a maximum of ten persons was to form the core design team.

GCASA project worker Mr Donat Santowiak used his existing network to approach potential starters, as well as reaching out to “unchartered” networks. It is important to note that every person approached committed to the process. It was the D & D project worker’s view that the underpinning reason for this generosity was the recognition of GCASA’s purpose and role in the community in minimising the occurrence of sexual (and any) violence. Everyone wanted to contribute by making a positive difference for those who would seek the MDC services.

The goal was to establish a balance of overarching academic input with specific skills and experiences.  This was seen as paramount. The initial group had the following membership:

It is important to note that many GCASA staff have also made suggestions and contributed creatively outside of the D&D Reference Group’s mission. D&D team meetings were at times attended and received significant contributions from Ms Fiona Boyle, Ms Alison Fonseca and Ms Marie Feeley.

As an added dimension to the design scope, two consultations were held with Headspace Youth Reference Group in Morwell and a local Indigenous Elders’ Group. These engagements affirmed the team aims, and added creativity to the design considerations.

For the purpose of this document, “clients’ arrival area” is referred to as the combined entry, reception and waiting spaces.

Intentionally, décor and design concepts/ ideas for the MDC were unscripted and aimed to follow what is at times described as a “grass roots evolution”. The only boundaries were the physical size of the clients’ overall arrival area, and the positioning of two toilets in the clients’ arrival area. To assist a starting point, GCASA project worker prepared copies of scaled drawings of the clients’ arrival area as one large blank space. Hence, the first consideration for the D&D team was to divide this area into individual spaces that would be practical, aesthetically harmonised, and most importantly, support the philosophical aims of the design. (safety etc)

Some members of the D&D team experienced difficulty interpreting 2 dimensional architectural drawings, and visualising these as 3 dimensional spaces. GCASA project worker Mr Donat Santowiak committed to constructing a scaled 3 dimensional model of the clients’ arrival area, and in doing so, assisted the creative process not only in the allocation of separate spaces but also (later) the finer details of specific fitout materials, textures, colours etc.

Initial conceptualisation aimed to assume clients’ experiences when entering the building, a step by step experiencing of its space, and also an imagining of possible emotional responses that were influenced by what people saw, felt and ‘sensed’. The airlock entry experience, with sight of the reception counter and noting of safe and private sitting/waiting spaces, were considered prime design considerations.

D & D aim to both maintain a sense of overall openness and yet offer separate waiting spaces led us to choose vertical timber columns, spaced so as to “imply” separateness.  These hardwood columns were to be spaced and be angled so that visual privacy could be achieved when viewed from specific points. Hence, clients entering from the airlock, would not immediately see anyone in the waiting spaces. (Like a venetian blind effect) From an operational perspective, this design allowed for GCASA reception staff to see (viewing from reception desk) clients should they be or become distressed, and thus provide immediate support.

The entry point to these waiting spaces was to be defined by columns ornate with indigenous art. From a natural aesthetic perspective, the aim was to emulate trees, and to create a part private and safe sense of space. Two such waiting spaces were designed in the general clients’ area, and one in the SABTS area.  Again, all timber columns were to be also angled so that limited vision was possible between all three waiting spaces.

The use of curves in shaping walls and the reception counter was initially aspired to. Unfortunately, budgetary constraints necessitated some compromises in our ultimate design. (curves being more expensive to construct than straight lines)

Throughout the creative process, D&D team members contributed many suggestions on materials, colours, textures and their application. The team’s consensus was a combination of painted walls and rock feature panels, space dividing timber columns, and a timber, ornate reception desk front. Floor carpet incorporating two distinct designs was to ‘tie’ all elements in unison.

It was also our wish to include the presence of water in some form as part of nature’s palette. After investigating the costs and practicality of fish tanks, “running water walls” and other options, we settled on a “slumped glass” wall panel in the airlock. This was to be semi-opaque cast glass, and would feature indigenous art work depicting aqueous environment animals (Platypi).

The alternate arrival area shared all the features of the general clients’ area. In addition it was to include furniture intended to bring young clients into shared activities while waiting, this being in the form of a small round table and squab type seats.

All GCASA counselling rooms at the north side of the building were to have individual outside spaces. These were to be individually bordered with “brush fencing” material, and have potted trees/bushes scaped into them. These spaces were to offer the choice of being with clients in “the open”, so adding to the philosophical underpinning of being closer to nature.

The D&D team welcomed Mr Malcolm Grant from Federation Training Horticulture School later in the MDC design process. Malcolm’s much appreciated contribution was to suggest landscaping options for the exterior of the building. The connection between the exterior and interior designs was considered paramount in assisting a more seamless visual and sensory experience for clients. The adaptation of fruit producing plants was the foundation of Malcolm’s proposal.

From the very first meeting, a deep sense of trust in the process and each other was evident in the team. This surprisingly manifested itself with some members sharing parts of life stories, this within their rationale of why they wished to contribute to the MDC project.

Each member spoke with much passion of the importance of the clients’ arrival area needing to create an “emotional settling comfort” for clients. Each member of the D&D team outlined their individual interests and area of expertise. This began a wonderful tide of freelance ideas, concepts and visions.

It was immediately evident that the intended aim of diversity in the D&D team had brought with it a fertile pool of different possibilities. However, this also raised our awareness that not everything placed on “the table” would become reality, and more importantly, how was the group able to support this likely reality.  The old saying, “beauty is in the eyes of the beholder”, rises to fore in such collective creative processes. As it happened, and thankfully, sensitivity toward individual contributions was enshrined in the values everyone arrived with, and hence no sophisticated formal “values/principles/guidelines” documents were created to assist in managing the process. Generosity, mutual affirmation and a genuine interest in what everyone had to offer underpinned the success of all six meetings convened.  There were also electronic communication of ideas and distribution of minutes between meetings, which was particularly useful when some team members were unable to attend a scheduled meeting.

Everyone in the D&D team was eager to follow up on ideas and conducted research on specific details in their own time between meetings. This generosity was very humbling and most appreciated as all members lived busy lives with many other commitments.

There were times in which the D&D team facilitator was self-challenged , while processing his own ideas and visions, and simultaneously acknowledging and promoting ideas that others had voiced, either formally or via casual conversations.

The last combined D&D team meeting was held on 26 November 2014.

The community development model approach to the MDC D&D project was a wonderful (and rare) treat. It offered agencies and the wider community an opportunity to contribute their skills, local knowledge and good will. It assisted in giving each of us a voice, and affirmed everyone’s potential in value adding to a project of such magnitude.

A deep thank you to all involved, and in particular to GCASA CEO Ms Fiona Boyle who believed and championed the project. Also Ms Natasha Habjan VICPOL, who with Ms Fiona Boyle, worked incredibly hard to support VICPOL to undertake the D&D team’s visons for the MDC.