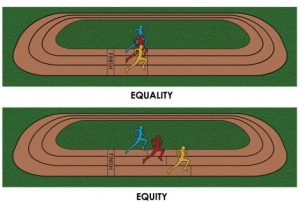 In the current discourse about gender, and human rights more broadly, we often hear of ‘equity’ and ‘equality’; two words frequently seen as synonymous, and used interchangeably. This is problematic; as there is a very real difference.

An often used analogy to describe the difference between equality and equity is the example of runners in their starting blocks. Picture an athletics track, with a group of runners, lined up for a race, all starting from the same point. Seems fair? This is equality. Although, if you look at the shape of the track and the lanes, it’s easy to see that the inside lane is a far shorter distance than the outer lanes. Therefore, an equal starting point isn’t really equitable when you have further to go.

Picture that running track again, with the starting position of the runners being staggered to allow for the lane position. This ensures that each of the runners is running the same distance; this is equity. The winner of this race is then determined by the ability of the runner, not where they started, or what lane they had the good fortune, or misfortune, to draw.

Today, being International Women’s Day, is a good opportunity to look at equality and equity from a gender perspective. Whilst considerable gains have been made to address the disparity between men’s and women’s rights, we still have a considerable task ahead of us if equity is our goal. Women and men can both attend university, vote, work outside of the home, and women can also now work in traditionally ‘male’ vocations. Despite the number of barriers for women to engage in these activities rapidly falling, women and men are not starting from the same point. Traditionally, men have been workers, providers, decisions makers. Prevailing cultural norms, despite our progress, still holds on to ‘traditional’ perceptions of what men and women should do. Women, having only really been in a position to meaningfully engage in the paid workforce for the past few generations, have considerable ground to catch-up to their male counterparts. One could say that despite attempts to achieve equality, women are still running on the outer track- with a few hurdles thrown in for good measure!

Perhaps then, our ultimate goal as a society would be to get to a point where equality is enough. Having everyone starting from the same point- as equals- would be just if there were no longer systemic disadvantages that necessitate equity. This would mean that every child born could allow their talents and passions to dictate the trajectory of their lives, regardless of their gender, ethnicity, sexuality, or physical ability.